In his 1956 Budget speech then Chancellor of the Exchequer, Harold MacMillan, said that “… some of our statistics are too late to be as useful as they ought to be. We are always, as it were, looking up a train in last year’s Bradshaw [train timetable]”.

Concerns over the timeliness of economic statistics are thus not new. However, subsequent improvements in the timeliness of economic statistics at a national level have not been so well matched by improvements at a sub-national or regional level. This explains why improving the coverage and timeliness of regional data in the UK was a key theme of Professor Sir Charles Bean’s Independent Review of UK Economic Statistics, which provided an impetus for the foundation of ESCoE.

We have developed econometric methods to improve both the timeliness and frequency of regional economic growth estimates in the UK. Our principal objective has been to build a statistical model capable of producing quarterly estimates of regional economic growth to a similar timetable as the Office for National Statistics (ONS) produce their growth estimates for the UK as a whole. Importantly, this is done ensuring these new quarterly data are consistent with, and indeed condition on, both the annual data for the regions that are (and historically have been) published by the ONS and the latest quarterly data for the UK as a whole which they add up to.

In this blog we summarise the work that we have undertaken to produce the new regional database, released publicly for the first time today here.

Context – why are new data needed?

Currently, economic growth in the regions of the UK is measured on an annual basis, in both nominal and real terms, using gross value added, which is very similar to gross domestic product. These annual growth estimates are released each December by the ONS for, our current focus, the twelve so-called NUTS1 regions of the UK. But they are currently released with a delay of approximately one year; and they date back, in their current form, to 1998 in real terms and 1997 in nominal terms. So, the most recent ONS data, released back in December 2017, provide estimates of regional growth up to 2016. This means that even late in 2018, as we are now, the most up-to-date official information we have on growth in the regions of the UK is nearly two years old. Economists and policymakers are very much looking through the “rear-view mirror” (see Bean, 2007). The limited historical coverage of these regional data also impedes analysis of historical patterns in regional economic growth.

What have we done to improve the regional database in the UK?

In short, we have developed econometric models, that exploit existing ONS data at both the annual and quarterly frequencies, to “fill in” these “holes” in the current regional dataset. Thereby, we present a new, regional quarterly database of nominal and real gross value added dating back from the present day to 1970.

Using annual regional data, and published quarterly macroeconomic data for the UK as a whole, we construct and then estimate a large econometric model (known as a vector autoregressive model) at the quarterly frequency. Estimation involves the use of state-of-the-art econometric methods, adapted from the machine-learning literature, to facilitate estimation of what is a large model allowing for dynamic interactions across regions. Importantly, this is done ensuring that these quarterly estimates are consistent on a historical basis with the observed annual regional data from the ONS. And, just as importantly, this is also carried out ensuring that the new quarterly estimates add up to, across regions, the quarterly growth estimates for the UK as a whole.

Quarterly updates to the regional database

Given that these quarterly growth data for the UK as a whole are released fairly quickly, with data currently available around 45 days after the end of the quarter, we can and will  update our regional growth estimates each quarter on receipt of the latest UK quarterly estimate of gross domestic product and gross valued added from the ONS. This will involve both providing an estimate of regional growth for the additional quarter but also updating the historical database, in part reflecting any data revisions to the historical data.

Our release dates for these regional quarterly updates mimic, with a short lag, the ONS’s release calendar for its “GDP first quarterly estimate”. We allow for this lag to enable us to process the latest ONS data for quarterly UK economic growth and re-estimate our econometric models.

In simulated experiments, reported in KMMP (2018), we have found that our model produces accurate point and density forecasts of annual regional economic growth, up to one year ahead of the ONS data release. Our quarterly estimates are also well aligned with the quarterly growth estimates for Scotland that are now released by the Scottish Government.

We will continue to monitor and evaluate the accuracy of the updated estimates that will be published here each quarter.

What do the new regional data tell us?

We hope and imagine that our new, regional quarterly database of nominal and real economic growth dating back from the present day to 1970 will serve many different uses, depending on the user’s objectives. Hence we are making the data available publicly.

Figure 1 shows our central estimates of real and nominal GVA growth, since 1970, for each NUTS1 region of the UK. We also show UK growth on an equivalent basis (the solid black line). We can see that in both the nominal and real cases there is variation in the time path of regional growth. In particular, since 1995 London appears to experience more frequent periods of much higher growth than the UK as a whole; while the West Midlands and Wales appear worst hit by economic shocks in the early 1980s.

Given that Figure 1 is ‘busy’, following KMMP (2018) here we illustrate further how the new quarterly data can be used to contribute to our historical understanding of business cycle dynamics and connectedness between regions. 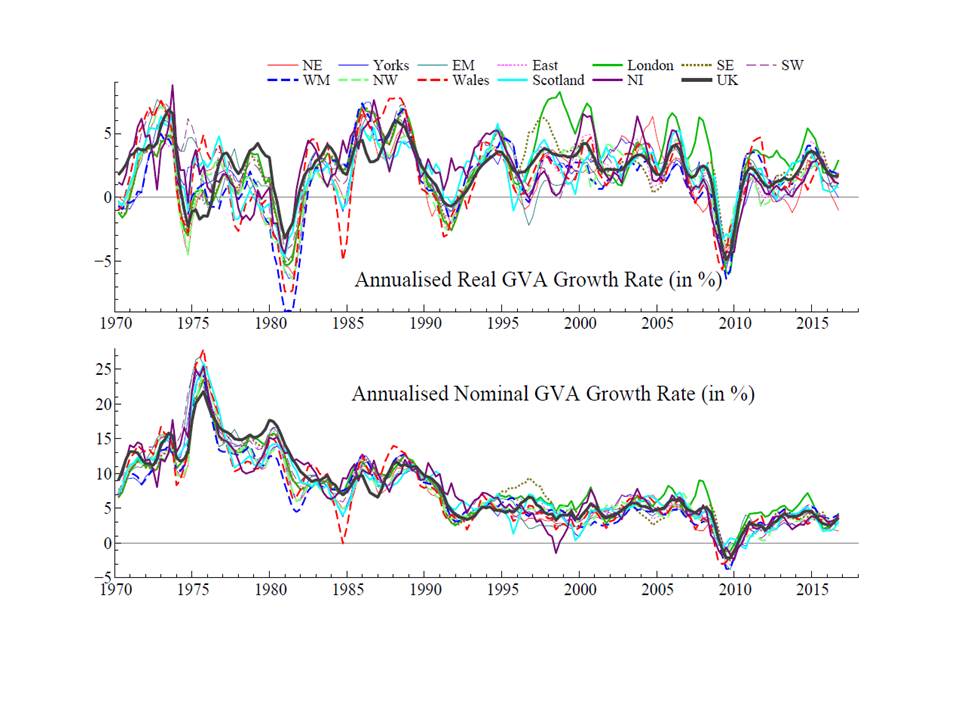 To draw out some common and contrasting features of these regional business cycles, evident in Figure 1, in Figure 2 we apply a business cycle dating algorithm, devised by Harding and Pagan (2002), to identify for each region periods of economic expansion and periods of contraction or “recession”. Harding and Pagan (2002) have found their algorithm to do a good job at tracking “recessions” in the US as identified by the NBER.

In Figure 2, periods of “recession” are when the line drops down. Inspection of Figure 2 shows that while there have been four main recessions for the UK as a whole, starting in 1973, 1978, 1990 and 2008, there have been many more regional recessions – as we should perhaps expect, given that regional ‘ups’ and ‘downs’ can be offsetting at the national level. We see considerable variation as to when regions, and the UK as a whole, enter and exit recessions. To take the global financial crisis period as an example, Figure 2 shows that some regions entered the recession before the UK as a whole (for example Yorkshire and the East Midlands); and a number of regions stayed in recession longer than the UK as a whole (e.g. Northern Ireland and Wales). This sort of perspective on UK economic growth is only possible because of the higher frequency regional data produced by our model.

Figure 2: Regional business cycles showing start and end of recessions in each region and the UK 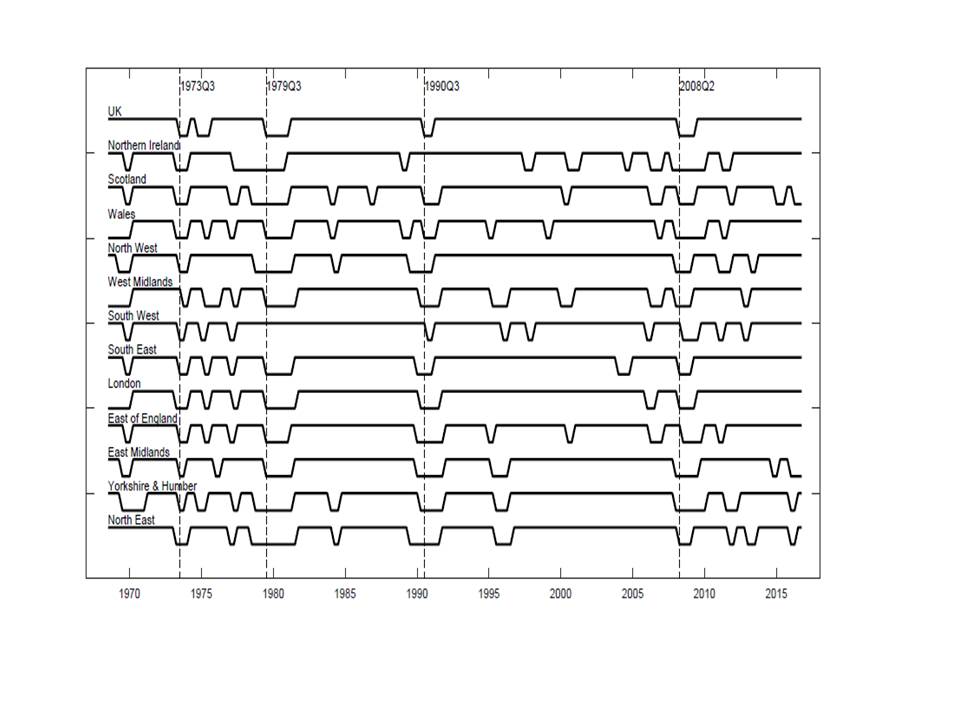 To illustrate further how we hope our new quarterly data are helpful in analysing and understanding the transmission of shocks and business cycle dynamics, Figure 3 shows the regional recession profiles of each region for the four UK-wide recessions since 1970. We see that London emerged more strongly from the 2008 recession than the UK as a whole. But this contrasts its experience in the other three recessions, when it recovered more slowly than the UK as a whole. Similarly, we see that while the 2008 recession was the deepest and longest lasting at the UK level, it was the 1979 recession which was the deepest for many regions, with the West Midlands, Scotland, North West, Yorkshire and the Humber and Northern Ireland particularly hard hit. This is consistent with macroeconomic analysis showing the differential effects of the 1970s oil price shocks. Scotland, in turn, emerged out of the 1973 recession rather quickly, perhaps spurred by the boom in activity in the North Sea at the time, stimulated by the discovery and extraction of oil. 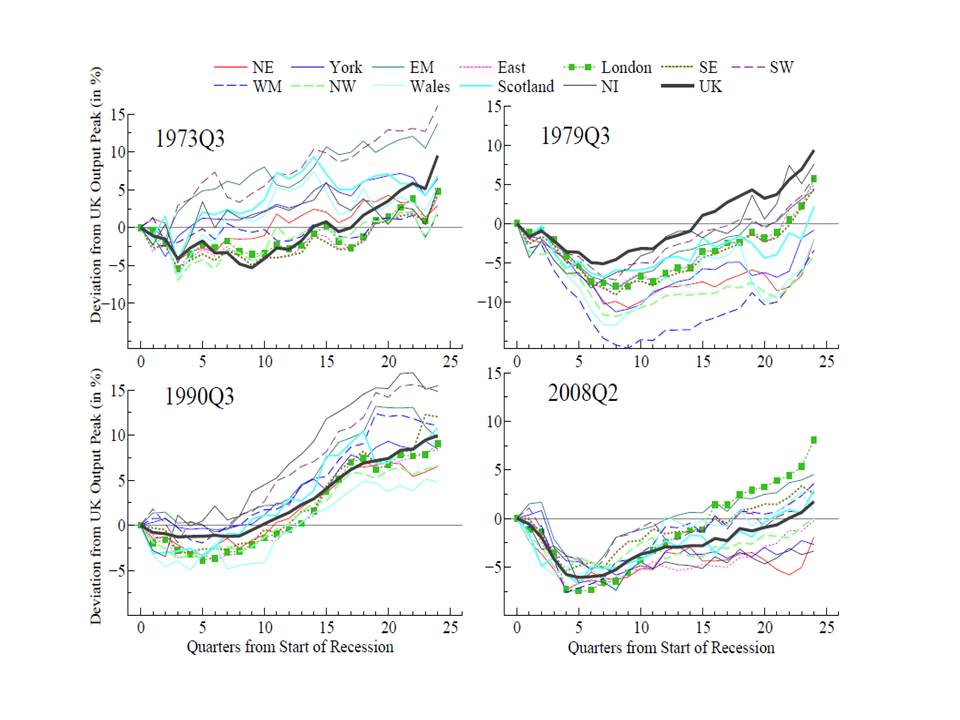 We will continue to develop our model and plan to extend it to consider greater spatial disaggregation, by producing regional growth estimates at the NUTS2 level. We will also use our model to produce early regional growth estimates, that importantly are consistent with both the soon-to-be released quarterly short term indicator data that the ONS will produce for the English regions alongside the data they already produce for Wales, and the existing quarterly growth data, for the other nations of the UK, produced by the Scottish Government and the Northern Ireland Statistical Agency. All of this work should provide a better (and timelier) understanding of developments in the economies of the UK.

For readers wanting a more detailed, technical explanation we have also released an ESCoE Discussion Paper (2018-14).