Labour productivity growth has been declining in advanced economies since the beginning of the 1970s, experiencing a more pronounced fall after the Great Recession. The causes of the slowdown remain a matter of debate especially in the more recent years for those countries that are increasingly involved in the digital transformation and in global value chains (GVC), both assumed to generate productivity gains.

In our paper (full version available here), we investigate whether the reorganisation of the production activity, as captured by the extent of GVC participation and sectoral digitalisation, offers new insight about the drivers of productivity growth over the last fifteen years in the modern economies.

Our analysis starts with an overview of labour productivity trends for 12 European economies and the US in 2000-2015. We offer some evidence on the extent of sectoral productivity growth and digitalisation across countries looking at three groups of sectors, “high” (HD), “medium” (MD) and “low” (LD) digital-intensive industries as in (Calvino et al., 2018). The data show that in the post-crisis years, HD sectors expand faster but MD industries account for the largest share of value added while LD display heterogenous growth patterns in the sample economies. The slowdown is widespread across sectors and countries, with a few exceptions including HD sectors in Germany, and MD sectors in Denmark, Italy and Spain.

We further explore this relationship by estimating a standard production function augmented with measures of backward and forward participation and resorting to instrumental variables. Our findings suggest that both modes of GVC participation positively and significantly affect productivity growth, with forward linkages exerting a stronger impact compared to backward participation. 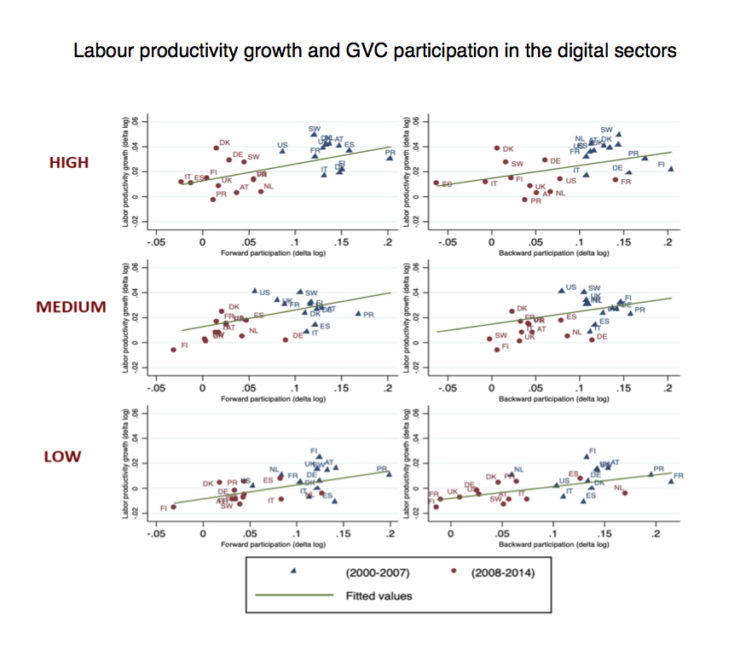 Our results support the assumption that the increasing relevance of GVC participation together with the digital transformation significantly affected productivity growth over the last fifteen years, thus suggesting that both these (interrelated) phenomena might have profound implications for restoring economic growth.