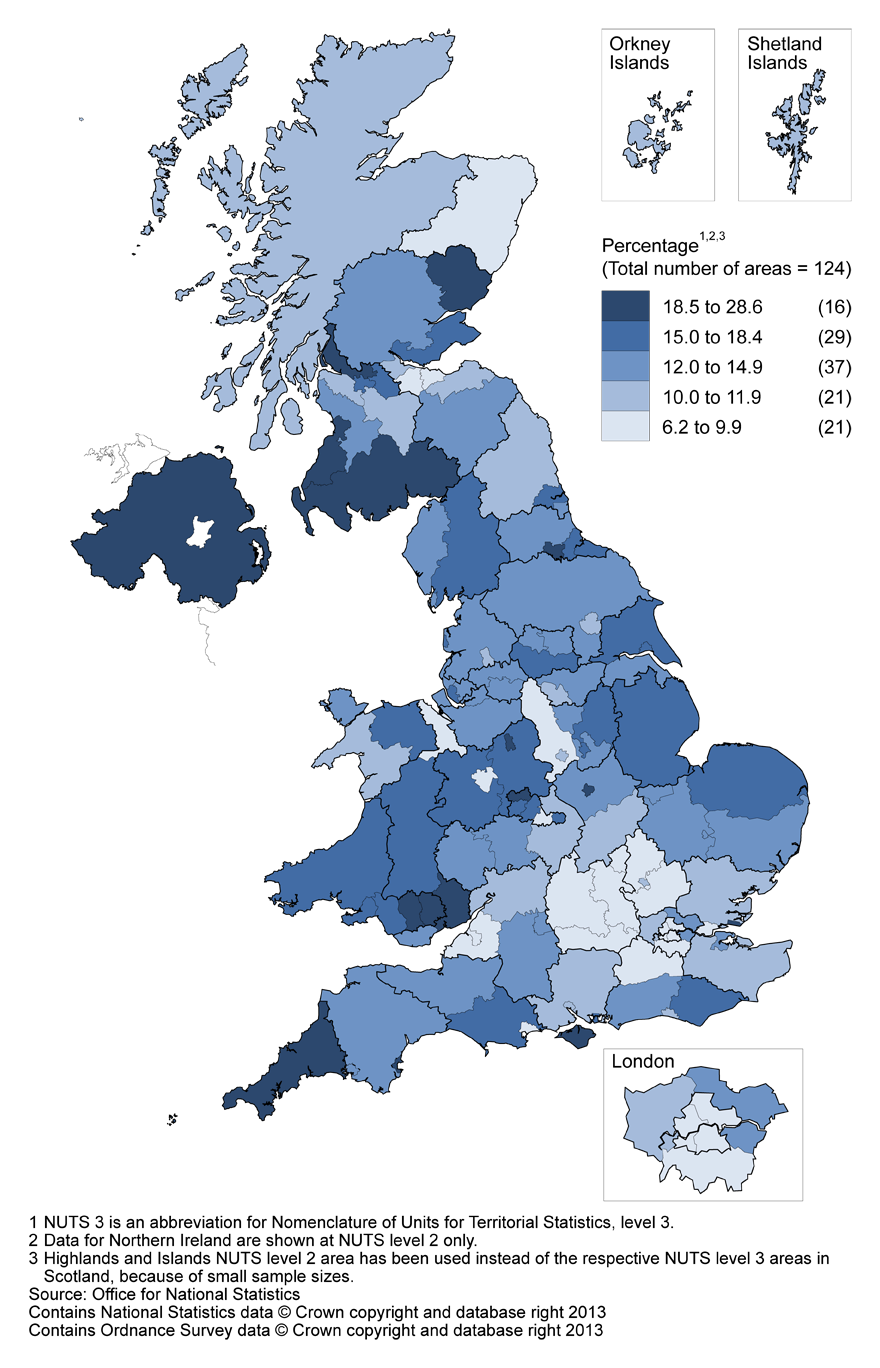 This section contains regional UK data. Official data begins in the 1960s, this is supplemented by estimates for regional UK output by Frank Geary and Tom Stark back to 1861 and the regional employment estimates by Clive Lee. Recent ESCoE research has also developed quarterly regional GDP estimates that are updated alongside national accounts releases.

ONS have made available historical data compiled from historical editions of the ‘Regional Trends’ and ‘Economic Trends’ journals which have not previously been available in an electronic format between 1966 and 1996.

Nowcasts of quarterly regional data starting in 1970 consistent with the aggregate national accounts are now being produced as part of ESCoE Project 3.3 by Gary Koop, Stuart McIntyre, James Mitchell and Aubrey Poon:

Frank Geary and Tom Stark have constructed regional GDP estimates for the UK for each of the census years back to 1861 which have been published in a number of papers Geary and Stark (2015) and Geary and Stark (2018). Their recent ESCoE technical paper TR06 filled in the gap created by the absence of a census in 1941 and produced estimates for 1935 and 1938. The regional GDP estimates require three sets of data: labour force by sector and region which are large derived from Clive Lee's estimates (see below), aggregate GDP and aggregate GDP by sector based on Charles Feinstein's National Income data; and wage relatives comparing sector wages in each region with the UK sector wage. The wage relatives used to construct the data are discussed in a mimeo kindly supplied by Frank Geary:

The Vision of Britain Project run by Professor Humphrey Southall at Portsmouth University has a large amount of historical regional data for Great Britain at a granular level from 1801 to the present and should be a first port of call for granular regional historical statistics over the past two centuries:

For earlier regional estimates the Cambridge Group for the History of Population and Social Structure is currently engaged on a project run by Professor Leigh Shaw-Taylor investigating the occupational structure of Britain from 1379-1911. The aim is to reconstruct the occupational structure and population geography of Britain over as long a period as possible, in as spatially disaggregated a form as possible.

Other estimates of regional employment data since 1841

In the 1970s Professor Clive Lee constructed estimates of regional employment at an industry level based on SIC 1968, derived from decennial census data from 1841 to 1971. This was made use of by many studies including Geary and Stark who used the data to construct their regional output estimates. Professor Lee has kindly allowed us to publish a spreadsheet of the employment estimates he derived from the underlying census data at a county level and is made available below, though users should consult the Vision of Britain site above for more granular estimates based on modern industrial classifications. A major discontinuity was found between the data for the nineteenth-century and twentieth centuries with regard to the classification of distributive trades. The distinction between the manufacture and distribution of many commodities was much less in the C19th than it was in the subsequent century and today. Accordingly the data were constructed on two bases: Series A (1841 — 1911), in which distributors in a given industry were included under the same order as the manufacturers; and Series B (1901-1971) which they are allocated to distributive trade. For details of the methods used to construct the series users should consult Professor Lee's book, British Regional Employment Statistics 1841-1971, Cambridge University Press.

Work by Robert Calvert Jump at the Institute of Political Economy University of Greenwich has produced provisional estimates of workforce job counts for British local authority districts between the years 1981 and 2018. The estimates are produced by adjusting local authority job counts drawn from the Census of Employment, Annual Employment Survey, Annual Business Inquiry, and Business Register and Employment Survey to match regional job counts drawn from the Workforce Jobs dataset. The result is a measure of sub-regional workforce jobs which is consistent with publicly available national statistics. The paper discusses the methodology and the provisional data have kindly been made available below and will be updated following further peer review:

The whole of Ireland was part of the United Kingdom between 1801 and 1922. Subsequently only Northern Ireland was part of the UK. For various purposes historical statistics for the whole of Ireland before 1922 and subsequently Northern and Southern Ireland after that point may be useful for researchers in the history of the United Kingdom and the British Isles more generally.

The Duanaire project led by Dr Aidan Kane is building a set of historical statistics for Ireland. Irish public finance data for the C18th has already been made available:

An ESCoE discussion paper by Gary Koop, Stuart McIntyre, James Mitchell and Aubrey Poon outlines the methodology behind the nowcasting estimates of regional growth in the datasets section.

The following titles are available to select in the dropdown menus of this section.

Please select a publication title and year from the boxes below to narrow down the list. Alternatively type in a general search term. The available excel and pdf files are shown in the table. If the publication you are looking for is not in this section please see the complete list of downloadable publications.