From amongst the noise and commotion of the countless public meetings held during the 2016 EU Referendum, there was a voice that cut-through like few others. At an event in Newcastle, King’s College London’s Europe expert, Professor Anand Menon, invited the audience to imagine the likely impact of Brexit on the UK’s GDP. A response was shouted, “That’s your bloody GDP. Not ours.”.

This incident has since gone on to become the stuff of legend. ‘That’s your bloody GDP, not ours’ is emblematic of the way in which it is said that elites and experts have lost contact with the public and lost the confidence of the public. It’s a standard exhibit in articles and books on what’s become known as ‘post-truth’.

Today, ESCoE have published my Occasional Paper ‘That’s your bloody post-truth’, which you can read in full here. The purpose of that paper is not to explore the general realms of misinformation, fake news, trust in experts and associated issues. That’s well-trodden ground, perhaps even hackneyed, with at least three books published on ‘post truth’ in 2017 alone. The purpose is to ask: What should we do, if anything, to maintain confidence in economic statistics?

My paper collates four talks delivered at the ESCoE Conference on Economic Measurement at King’s College London in May 2019 (YouTube talks at 1:17:42). These talks were delivered by Dame Kate Barker, Tony Curzon Price, Mairi Spowage, and Rebecca Riley.

Dame Kate Barker is an influential economist, former member of the Monetary Policy Committee, and closely involved in a wide range of issues including housing market economics and inflation indices. In her talk, Barker unpacked notions of truth, accuracy and interpretation. Her contribution argues against over-simplified thinking about economic statistics.

Tony Curzon Price is a former economic advisor at the Department of Business, Energy and Industrial Strategy and before that at the Competition and Markets Authority, who has thought and written on the economics of networks, data, and platforms. Curzon Price asked what we should understand by trust in economic statistics in an era of “omni-measurement” and the role that trust should play in our thinking about how we measure the economy.

Mairi Spowage, formerly of the Scottish Government, then Deputy CEO of the Scottish Fiscal Commission, is now in academia at the Fraser of Allender Institute, Scotland’s leading independent economic research institute. She used the case study of the Government Economic and Revenue Scotland statistics to outline the practical steps that can be taken to enhance trust in a major economic statistic.

All four of these talks resolutely focused on economic statistics. They didn’t consider the much wider range of statistics on society and the population produced by a wide range of official bodies in the UK. They sought to examine whether there are specific issues of trust in economic statistics, and what remedies there may be. 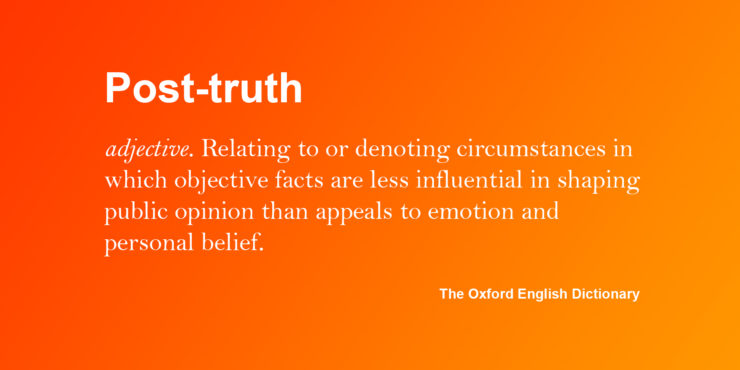 Many discussions of ‘post truth’ tend towards the anecdotal – starting with one or two celebrated cases and then generalising from them. What’s interesting about the four contributions is that between them the authors are focused less on building from anecdote, and more on thinking about the conceptual issues involved and the practical steps that can be taken by producers of statistics. In that sense, by developing a conceptual model and considering practical applications, the four speakers are exemplifying an economist’s approach to thinking about a problem.

Broadly speaking, Dame Kate Barker and Tony Curzon Price focus on the conceptual issues surrounding truth and interpretation (Barker) and trust (Curzon Price). Rebecca Riley and Mairi Spowage highlight the steps that can be taken to maintain and enhance trust in economic statistics, including the need to invest in economic statistics so that they remain relevant (Riley) and the benefits of adherence to the principles of the Code of Practice for Statistics (Spowage). Taken together, the talks balance conceptual clarity and practical application with brilliant agility.

Another striking feature of the talks is how well the authors locate issues around economic statistics in their context. Kate Barker emphasises the need to consider what judgements the statistics are being used to inform – the decision-making context; Mairi Spowage highlights the political dynamics surrounding an important fiscal statistic;  Tony Curzon Price thinks about the role played by non-official data in understanding the economy; and Rebecca Riley brings this contextual focus together crisply with her emphasis on the need for relevance in economic statistics.

The contributions provide practical advice for producers and users of statistics alike. Producers must: constantly invest in understanding the changing dynamics of the economy to avoid depreciation (Riley); engage fully with users, explaining concepts, limitations and seeking to understand what questions users want to answer (Spowage, who talks of a ‘steady process’ of building trust); innovate in the communication of concepts like uncertainty (Riley); and recognise the central role of trustworthiness (Curzon Price). In short, producers should comply with the principles and practices of the Code of Practice for Statistics (UK Statistics Authority) https://www.statisticsauthority.gov.uk/code-of-practice/

For users there is a recurrent theme of not placing undue weight on statistics. This is the strong message of Barker’s contribution, which sets the tone for all the papers, and it is echoed by Curzon Price (on peering into the “sausage factory” of producing national statistics, one sees that “Balancing items, models and adjustments abound”) and Spowage (some users can regard a specific economic statistic as “if it were an attempt to measure a finite physical quantity, and not – as it in fact is – an estimate to inform useful understanding…”).

It’s worth considering whether the talks combine to provide us with a simple response to the following challenge: if there is a cancerous mistrust in all statistics and expertise, and it is infecting and undermining economic statistics, what should we do about it?