UK GDP data for the second quarter of 2019 were released last week. These data showed that the UK economy contracted by -0.2% in Q2, with the UK economy 1.5% larger than the year before (on a 4Q–on–4Q basis).

Activity in the build up to the end of March deadline for the UK to leave the European Union (EU), for example widely noted stockpiling activity by business, meant that UK growth was a healthier 0.5% in Q1.

With the subsequent postponing of the UK’s departure from the EU until later in 2019, the weaker growth in Q2 was anticipated, as firms ran down stockpiles built up in Q1 and other factor such as economic uncertainty continued to be a drag on growth.

In this blog we explore what this pattern of UK-wide growth in Q2 means for the regions and nations of the UK.

To do this, we use our regional nowcasting model built out of research undertaken through the Economic Statistics Centre of Excellence. You can find out more about the model here. Our model allocates UK wide growth to each of the regions and nations of the UK.

Our headline results, as always, refer to growth in the year to the latest quarter.

We can see that over the year to 2019 Q2, a few parts of the UK grew more quickly than the UK as a whole: London, Yorkshire and The Humber, South West and North West, while the rest grew more slowly.

Northern Ireland, perhaps unsurprisingly given its exposure to the economic challenges around Brexit, recorded the weakest growth of any part of the UK over the past year. In general, growth across the UK remained subdued and below trend, with the possible exception of Yorkshire and The Humber.

Our model also enables us to produce estimates of quarterly growth by region and nation of the UK.

This series is more volatile than the growth estimates we usually report, reflecting in part that actual quarter to quarter growth is more volatile than year to year growth, but also that the confidence intervals around our quarterly growth rates are larger than for our headline annual measures. In other words there is more uncertainty around these estimates.

Nevertheless, given interest in how activity in the UK economy in Q2 was distributed across regions, our model provides one way of exploring these patterns. See Chart 1 below where we compare the estimates from our model for Q2 to the average Purchasing Managers’ Index (PMI) measure of activity levels produced by Markit for each region of the UK.

We have put a linear trend line through the middle of these estimates to illustrate the relationship between these two sets of data.

PMI data are a closely watched early indicator of the health of the economy. A value of 50 indicates no change in activity, while > 50 indicates expansion and < 50 indicates contraction. Values further away from 50 indicate stronger growth/contractions.

Chart 1: Comparison of our economic growth estimates and PMI measures for each region in Q2 2019 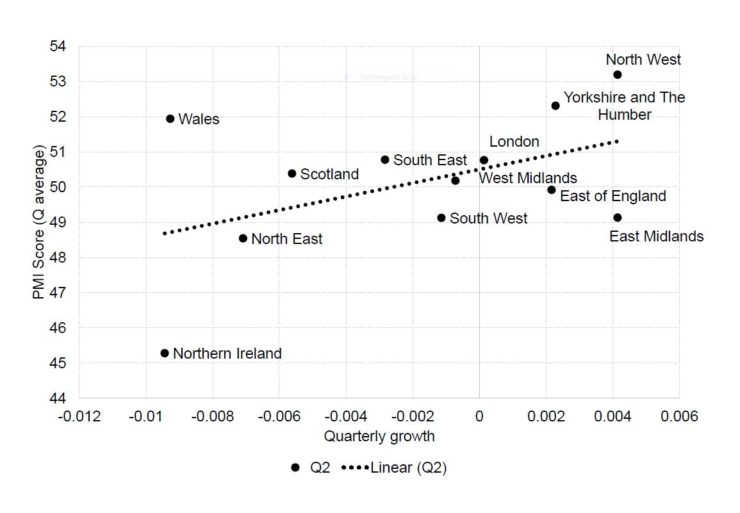 It is important to note that these regional PMI data do not directly enter our model, given that we have a relatively short span of data for these measures (data for some regions of the UK are available from 1998, but others start only in 2002).

Nevertheless, it is clear that our model is picking up similar patterns of growth to that implied by the PMI activity measures, albeit they measure two different things. The PMI data reflect data from supply chain managers on their assessment of activity changes, whereas our model is based on whole economy gross value added (GVA) data – which recall is the regional equivalent to GDP.

Our quarterly growth estimates suggest that Northern Ireland, the South East and South West of England, Wales and Scotland —like the UK as a whole—saw their economies contract in Q2 of 2019.

A number of other regions are shown as having small and positive growth, however as mentioned earlier the confidence intervals around these quarterly data are such that we cannot rule out the ‘true’ growth rate in Q2 being negative in these regions. London, the West Midlands and the North West appear to have still seen some growth in Q2.

Comparing our estimates for Scotland to official data

For Scotland we can also compare our model-based estimates, as we did last quarter, to those produced by the Scottish Government.

There are two reasons why the growth data produced by the Scottish Government and those produced by the ONS for Scotland (it is the latter we calibrate our model on) differ.

The first is that the Scottish Government construct their own GDP deflator for Scotland and do so on a different basis to how the ONS produce their sub-national deflators.

The second is that the Scottish Government use a different method to calculate activity in the Construction sector in Scotland than the ONS do (this blog shows the substantial impact this can have on Scottish GDP).

Chart 2: Comparison of our economic growth estimates for Scotland to those of the Scottish Government 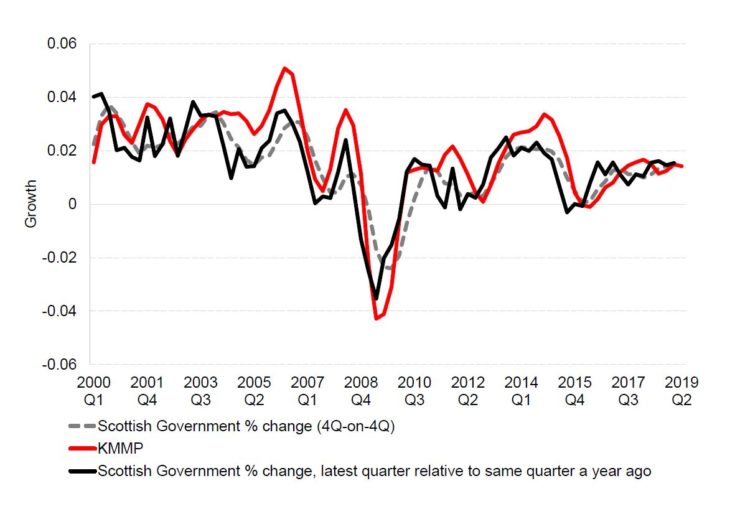 In summary, the first six months of the year have been a challenging time for the UK economy, with faster growth in Q1 driven in large part by preparations for UK exit from the EU, followed by a contraction in activity in Q2 as businesses ran down their stockpiles as Brexit was postponed.

In the year to the end of June 2019 there was faster growth in London, Yorkshire and The Humber, and the South West, with the weakest growth in Northern Ireland and the West Midlands.

Our results show that there is a clear regional impact of the Q2 Brexit related contraction of economic activity in the UK as a whole, with Northern Ireland, Scotland, Wales and the South West of England seeing activity fall the most.

With the UK Government indicating that the UK will now exist the EU on 31st October 2019, economic growth in the final six months of the year remains highly uncertain.

The next release of UK GDP, covering the period July – September 2019, will be released in November 2019, by which time we will know whether the UK did or did not exit the EU on 31st October.

We will release our next set of regional estimates shortly after the data for the UK as a whole are released.