GDP and Welfare: A spectrum of opportunity

The profession of economics is most fundamentally concerned with how to maximise people’s welfare. Welfare, also known as ‘utility’ in the jargon, is essentially a measure of the overall happiness or satisfaction of a person. Economic statistics, as a result, has a duty to provide an indicator of welfare, by which the variation and changes in it can be evaluated.

Arguably the most famous economic indicator is Gross Domestic Product, or GDP, which is a measure of the total income, expenditure or values-added of an economy. GDP is measured following international standards to ensure international comparability. But these standards have critics – many economists and non-economists alike have challenged the traditional approach to National Accounting.

For instance, GDP has been described as ‘a male measure of the economy’, as it does not include the value of services produced in the household, such as cleaning, cooking and caring (activities  predominantly done by women historically). Since these activities clearly contribute to living standards, any indicator of welfare would be incomplete without them. This critique is part of a wider question of ‘where to draw the line’ when it comes to economic production, and there are strongly held views on both sides of that line.

More recently, the modern economy has demanded new insights into the role of technology in the economy. In particular, the fact that many consumer services are now free to consume, such as digital entertainment, online search engines, and plenty more. The fact that these are free mean they do not feature how you would expect in GDP (and in same cases, do not feature at all!)

Others argue that GDP fails to fully capture the important drivers of economic growth – capital assets. The rise of intangible assets has been partially reflected in the National Accounting guidance, but many believe that there is some way to go on this front. Perhaps the most troublesome of intangible assets is data, which has become akin to a second currency in the modern economy – how to value data is a pressing challenge.

Environmental sustainability is of course an important concern as well. Natural resources (such as land, oil, and fresh water) are incompletely captured in the National Accounts, and some believe that this leads to environmental issues being overlooked in economic analyses. Better capturing natural capital, alongside other sources of capital, is high priority for many.

The wish list for changes to GDP is long, and different people will have different priorities and requirements. It’s unlikely that one statistic will ever satisfy everyone. As such, our new ESCoE Discussion Paper outlines a novel approach to bridge the divide – a practical spectrum of approaches, stretching from traditional measures of economic production, to multi-dimensional measures of wider human well-being. 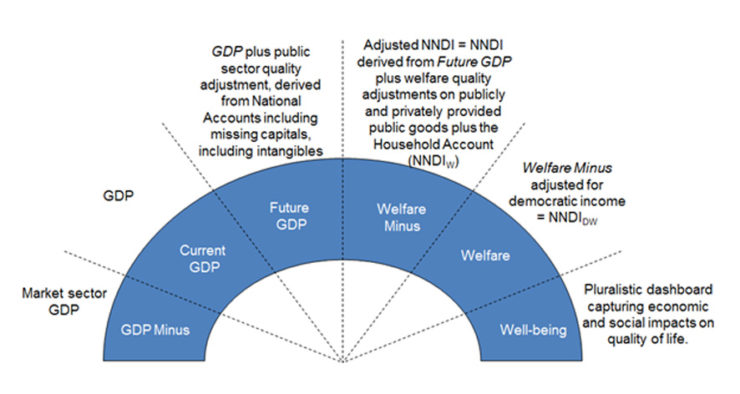 It is worth noting that GDP is not on the far extreme of this spectrum – it already includes ‘free’ public services, and the value of houses to their owners. Additionally, work is underway on many of the later stages of this spectrum in isolation. ONS already produce experimental statistics on intangible assets, natural capital, and a satellite household account, as well as quality adjustments to (free) public services in estimates of productivity.

We see some of these steps as being within the scope of future revisions to National Accounting guidance. Some, however, will likely remain beyond GDP for the foreseeable future. As such, we envisage a range of measures to meet a range of user needs. GDP will continue to be needed for monetary and fiscal policy, and to maintain international consistency. But new measures of welfare also have their place, to help policy makers better evaluate policies, to make explicit the trade-offs inherent in economic activity, and to provide a better barometer for long-run standard of living increases.

To develop this new set of measures, and the associated statistics framework, will not be easy, cheap or quick. However, changes in technology, data techniques and new sources of data mean the economic measurement community, and specifically National Statistics Institutes, are on the cusp of being able to affordably move from just measuring what the economy can produce to much more than that. We think this paper, alongside other similar papers from colleagues around the world, are an essential first step on this journey.